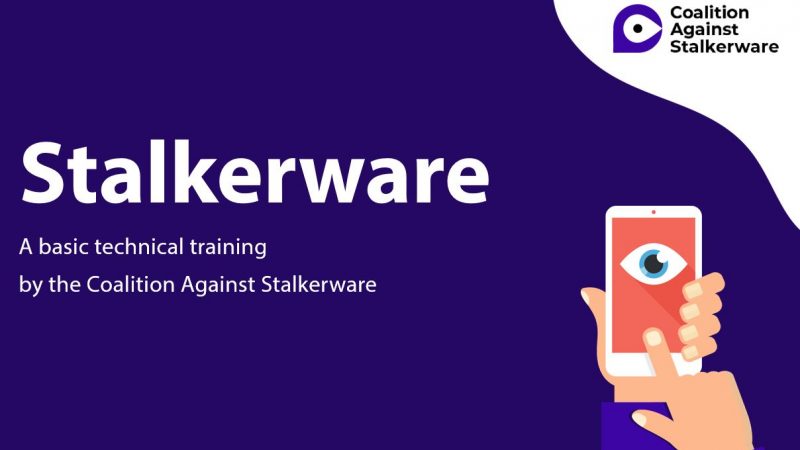 Fulfilling one of the Coalition’s founding missions, the Coalition Against Stalkerware’s basic technical training on stalkerware aims to help increase capacity building among non-profit organizations, working with survivors and victims, law enforcement agencies and other relevant parties to tackle this form of online abuse.

Stalkerware is commercially available software used for cyberstalking, typically installed on an intimate partner or ex-partner’s phone. To raise awareness of this form of digital abuse and train experts working with such victims, ten organizations co-founded the Coalition Against Stalkerware in November 2019. It has grown into a global network of more than forty partner organizations from around the globe, working in domestic violence survivor support and perpetrator intervention, digital rights advocacy, IT security, and academic research.

Training for a wide range of experts

The training aims to fill a skills gap, as professionals need tailored resources on how to tackle this form of cyberstalking. The Coalition’s basic technical training covers the most relevant questions on stalkerware from practitioners working with victims of violence: what is stalkerware? What are the methods of installing it? How can you detect and protect against it?

With input and feedback from many members, the full training content was developed by Kaspersky experts and Martijn Grooten, a coordinator of the Coalition. The training content consists of a slide deck and a video presentation, while this is only available in English at the moment, translated versions are envisaged to facilitate capacity building across the world.

In addition, the Coalition puts emphasis on the fact that experts from the area of law enforcement, judiciary or tech business may also benefit from the basic technical training. Therefore, the Coalition aims to share its expertise with a wide range of experts to better help victims.

At the beginning, members will run a pilot phase to deliver the basic technical training to partners from the aforementioned groups with whom the Coalition has established contact. In the future, the Coalition envisions providing the training to all interested parties upon request.

Cyberstalking is a growing issue

Coalition members reported a significant growth of stalkerware incidents in recent years, statistics confirmed by domestic violence organizations as well as from an IT security detection view:

“The use of stalkerware by perpetrators of intimate partner violence can be  terrifying for survivors, given the breadth of personal information abusers can access through this technology. Because privacy can be the key to safety for survivors, addressing their concerns around surveillance and monitoring is critical. The National Network to End Domestic Violence (NNEDV) works to increase awareness about this type of abuse and support for survivors who are concerned about it,” comments Deborah J. Vagins, NNEDV President and CEO.

„Online and offline participation is an important part of recovering from violence. And it is a human right” says Kerstin Demuth of the Federal Association of Women’s Counselling and Rape Crisis Centres (bff). “In order to end violence and empower survivors, they must be able to trust their phones, computers and online accounts – and shut stalkers out. Cooperations between victim support organisations and tech companies help us to stay ahead and recognize digital threats and support survivors.”

“Online violence is just another form of gender based violence. We need to stay ahead of the game and provide training for service providers,” emphasizes Alessandra Pauncz, Executive Director at the European Network for the Work with Perpetrators of Domestic Violence.

“Stalkerware is a reality in all countries, perpetrators buying and installing them on their victims’ devices, but we have also encountered resellers or developers of such badware in France. The gendarmerie nationale welcomes victims of gender based violence both offline and online through the 24/7 ministerial portal at https://arretonslesviolences.gouv.fr/. At the same time, the CyberGEND network of specialised investigators is also regularly involved in malware investigations, including stalkerware. We are looking forward to making this training available for all investigators to raise awareness and take the fight against stalkerware in France a step ahead.”, underlines General Eric Freyssinet, Head of the gendarmerie’s National focal point for the fight against cyberthreats.

“Kaspersky has been researching the topic of stalkerware for years, and we have a lot of technical expertise, which can help protect people. Working on this course together with our partners was a unique experience – colleagues from cybersecurity companies complemented it with their expertise, making it a true cyclopedia on the topic, while professionals from service providers gave tons of amazing insights on how to better deliver this tech information. Now, our experts look forward to continuing their work with organizations which are in direct contact with victims of stalkerware and delivering the Coalition’s training to our partners,” comments Christina Jankowski, Senior External Relations Manager, Kaspersky.

About Coalition Against Stalkerware

The Coalition Against Stalkerware (“CAS” or “Coalition”) is a group dedicated to addressing abuse, stalking, and harassment via the creation and use of stalkerware. Launched in November 2019 by ten founding partners – Avira, Electronic Frontier Foundation, the European Network for the Work with Perpetrators of Domestic Violence, G DATA Cyber Defense, Kaspersky, Malwarebytes, The National Network to End Domestic Violence, NortonLifeLock, Operation Safe Escape, and WEISSER RING –, the Coalition has grown into a global network of more than forty partners. It looks to bring together a diverse array of organizations working in domestic violence survivor support and perpetrator intervention, digital rights advocacy, IT security and academic research to actively address the criminal behavior perpetrated through stalkerware and raise public awareness about this important issue. Due to the high societal relevance for users all over the globe, with new variants of stalkerware emerging periodically, the Coalition Against Stalkerware is open to new partners and calls for cooperation. To find out more about the Coalition Against Stalkerware please visit the official website www.stopstalkerware.org